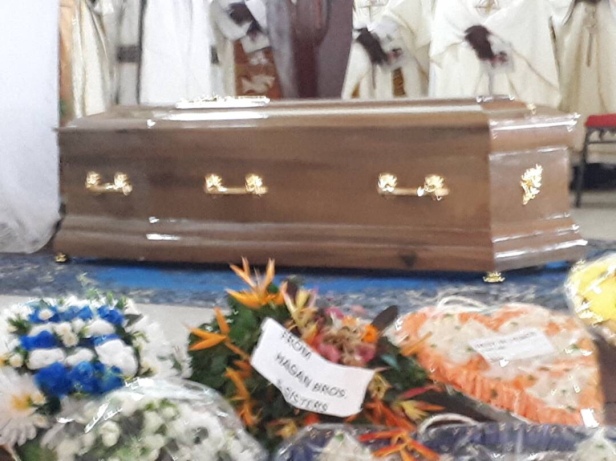 A Requiem Mass was held on 13th July ,2018 at the Star of the Sea Cathedral, Takoradi for Rev. Msgr Lucas Kwamena Binnah who died on 8th June 2018.

Delivering the homily, Archbishop Emeritus Most Rev. Matthias Nketsia who happened to be the classmate of the late Msgr. Binnah recounted their seminary days and eulogized the late priest to be hardworking, disciplined and a matured seminarian who understood his calling.

He again intimated that the essential function of the priesthood is sacrifice and that is what Msgr Binnah lived and worked for. He therefore admonished the faithful to pray for the priests and themselves. More importantly, he asked the priests to pray for one another so that like Paul they can say that “after preaching the Gospel, I myself will not be cast out of the Kingdom”

After completing standard school at Shama Catholic Middle School, he trained and taught for a while as a pupil teacher before entering the preparatory seminary for his priestly formation.

He was ordained a Catholic Priest on 19th July 1970 by the late Most Rev. Joseph Amihere Essuah of blessed memory. Msgr. Binnah and Msgr. John Adade were the first priests of the Sekondi-Takoradi Diocese.

The Requiem Mass was presided over by Most Rev. John Bonaventure Kwofie CSSp and concelebrated by 146 priests. Also present were Most Rev. Matthias Nketsia, Archbishop Emeritus of Cape Coast Archdiocese and Most Rev. Joseph Essien of Wiawso Diocese.

The mortal remains of Msgr Binnah was interred at the priest’s cemetery at the St. Mary’s Minor Seminary at Apowa. And the casket for his burial was provide by the Immaculate Conception Catholic Church at Asankragwa.